New York Riesling and Cabernet Franc have fairly received their share of attention from both the trade and wine-drinking public. But ask a winemaker to show you their Chardonnay or Pinot Noir and you’ll be met with a grin ear to ear. In this seminar, we’ll explore our own cool climate expressions of those grapes made so famous by our cool climate regional cousin of Burgundy, France: Chardonnay and Pinot Noir. 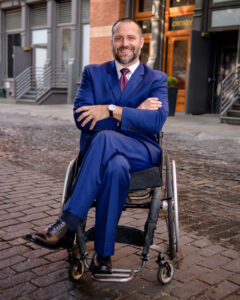 Yannick is the Head Sommelier at the University Club and Proprietor of Contento Restaurant located in NYC. He is a proud New Yorker born into a family of French restaurateurs who knew that hospitality was his calling from a young age.

Yannick worked at Le Cirque, Oceana, JeanGeorges, and Atlas before becoming a sommelier at Felidia and Atelier at the Ritz-Carlton. In 2003, a car accident left Benjamin paralyzed below the waist and he quickly adapted, outfitting his wheelchair with a table that allows him to work the floor as a sommelier.

Yannick has been recognized among Wine Enthusiast’s Top 40 under 40 and was named Person of the Year by New Mobility Magazine in 2017. He was the resident sommelier on the hit radio show “On the Town with Michael Riedel” on AM 970 The Answer and has made multiple appearances on ABC, NBC, and CBS.

In 2015, Yannick starred in “Uncorked,” a documentary series about sommeliers on Esquire TV. Jancis Robinson of the Financial Times calls Benjamin “the new star of New York’s gastronomic firmament” and The Wine Spectator talks about Benjamin revealing a “kinder, gentler side of the profession.”

Yannick created Wine on Wheels – one of New York City’s largest and most exciting wine events which has also been expanded to other cities in Chicago, Portland, and Washington DC. Wine on Wheels brings together hundreds of esteemed sommeliers volunteering to pour over 250 wines from around the world for charity. Yannick is also a para-athlete and competes in marathons to raise money for Wheeling Forward.

Thanks to our sponsors: American National Insurance and Cadus Cooperage, Inc.

About the NY Drinks NY:

NY Drinks NY celebrates the exciting world of New York wines in the New York City restaurant and retail markets. We are currently finding new ways to continue connecting with wine professionals in place of our 2020 marketing events.

The New York Wine & Grape Foundation (the organization behind the NY Drinks NY program) provides opportunities for trade and media partners to learn more and taste a wide range of New York wines during an immersive experience and ‘behind the scenes’ look at winemaking in our Harvest Visits in the fall.

The New York Wine & Grape Foundation is a not-for-profit corporation promoting all wineries and grape-growers in New York State. The Foundation’s mission statement is “To have the New York grape and wine industry recognized as a world leader in quality, productivity, and social responsibility.”