Diverse and bold, with a long history stretching back hundreds of years, New York is reinventing itself as an epicenter of dynamic winemaking. The state is home to the first winery in the United States, and producers are drawing on that background to produce some of the most exciting wines in the country. Wine has been made since the 17th century and since the 1950s a successful focus on quality has taken hold to the point that New York is gaining a well-deserved reputation as one of the world’s most transformative regions. There is an incredible amount of diversity in climate and growing conditions: from Long Island, exposed to the Atlantic Ocean, to Hudson Valley, the historic heartland of New York wine, to Niagara and the Champlain Valley on the border with Canada, to Finger Lakes, which has established itself as a region that can compete with Germany, Austria, and the Loire Valley. Think cool climate, expect the unexpected. 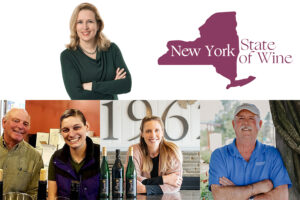 In the second episode of the webinar series, focused on the rich history of grape growing and winemaking in New York State, Felicity Carter of Meininger’s Wine Business International will host a panel of New York winery representatives to explore important milestones in the wine regions past: from its pre-prohibition beginnings, to the renaissance of quality winemaking in the 1960s, to the new trends emerging today. Joining Felicity are benchmark producers from the historic region of the Finger Lakes: Cameron Hosmer and Julia Hoyle of Hosmer Winery, Meaghan Frank of Dr. Konstantin Frank Winery, Scott Osborn of Fox Run Winery.