Riesling: The Noble One with Paul Grieco

Riesling is one of the most cold-tolerant of the Vitis vinifera grape varieties, with the highest quality achieved in cooler growing conditions. No wonder this noble grape is suited to the northern vineyards of New York State. Riesling is also known for its ability to produce very different styles of wine, and New York is no exception, where the wines are made in a wide range of residual sugar profiles from bone dry to very sweet. Join Paul Grieco and a panel of exemplary Riesling producers as they explore this historic grape variety and deliciously refreshing, aromatic white wine. 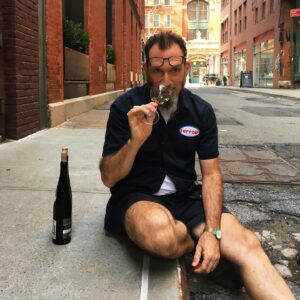 Paul Grieco was practically born in a restaurant. His family owned and operated Toronto’s landmark restaurant La Scala, where he was thrust into the world of service and hospitality at a very young age. Before beginning a career in the restaurant business, Grieco took a two-month trip to Italy to study wine. From there, the budding sommelier spent the next six years working with his father and grandfather at La Scala, overseeing the beverage program and managing the front-of-the-house staff.

In 1991, Paul traveled to NYC for a three-month sojourn, and he never left. Honing his service skills at Manhattan’s Remi Restaurant, and other top-notch places, like Bouley, Gotham Bar and Grill, Gabriel’s, and Judson Grill, which he opened with his mentor Chris Cannon in 1994. He eventually landed at Gramercy Tavern, to learn the aspects of “enlightened hospitality” from creators Danny Meyer and Tom Colicchio. During his tenure at Gramercy Tavern, Grieco won both the James Beard Awards for Outstanding Service in 2001 and for Outstanding Wine Service in 2002.

In 2003, Grieco and chef-partner Marco Canora opened Hearth in the East Village, and the duo’s first and second wine bars, Terroir, in 2008 and 2010. After a successful 11 year run together, Greico and Canora parted ways; Grieco taking ownership of Terroir, Canora remaining at Hearth. Today you’ll find Paul presiding over the beverage program at Terrior’s Harrison St location, where he and the team continue to innovate the utmost of hospitable wine service to the masses of “Acid Hounds,” who flood the downtown Tribeca neighborhood year round.