The Potential and Practicality of Regenerative Winegrowing in New York Vineyards

Regenerative winegrowing puts a new spin on a proven set of practices with potential benefits for both growers and climate change.

According to Regeneration International, a nonprofit dedicated to accelerating the adoption of regenerative farming and land management, regenerative agriculture “does no harm” to the land and “actually improves it” through technologies that revitalize the soil. This revolves around the concept of carbon drawdown, which describes the point in the carbon cycle where carbon dioxide (the most commonly produced greenhouse gas) is drawn out of the atmosphere by plants through the natural process of photosynthesis. Carbon is then stored in plant tissues or exuded through roots to feed soil microorganisms. Organisms in the soil can render carbon stable through a process called humification, thus allowing carbon to be stored in soil for decades. In the short-term, soil organic carbon provides structure, water holding capacity and fertility. The potential long-term benefits of soil carbon sequestration include a reduction of greenhouse gasses in the atmosphere which could halt or reverse climate change.

The practical benefits of building soil organic carbon have been recognized by farmers for generations, though perhaps not for the purpose of combating climate change. Undisturbed soils, rich in ground cover, have higher organic matter, microbial biodiversity, and water infiltration, making them better suited to agriculture. Keeping fields planted year-round prevents soil loss from erosion and runoff during heavy rain events. In an annual crop rotation, this is achieved by seeding a cover crop between cash crops, so roots remain in the soil even after the cash crop is harvested. Erosion prevention can also be achieved through the practice of no-till or low-till agriculture. Tillage loosens the soil and releases carbon emissions from decomposing plant matter. Reduced tillage keeps soils intact and preserves carbon content.

In the context of a vineyard, tillage is not necessarily a part of the management cycle, because grape vines are perennial. Grape vines can remain productive for decades, but the industry average for replanting is about once every twenty-five years to keep yields high. If tillage is practiced, the focus is primarily on the space between rows and under the vine trellis. In some vineyards, these spaces are cultivated to manage weeds and prevent competition for water and nutrients. According to Alice Wise, Grape Specialist for the Cornell Cooperative Extension and author of the VineBalance Workbook, “all vineyards on Long Island have grass row middles.” Long Island has a generally flat topography, so the risk for erosion in most vineyards is minimal. Therefore, the goal of this practice is primarily to improve water infiltration and biodiversity. Specific cover crop species are sometimes seeded for their nitrogen-fixing capacity or other nutritional benefits over grass. Alice notes that winegrowers on Long Island have experimented with perennial cover crops under vines, but “it is an expensive practice both in terms of establishment and maintenance” where some perennial species have been found to be “too competitive for water and nitrogen.” She also notes that “growing dense green cover under vines can also promote rodent damage to trunks, so seeded covers under vines have not really become a widespread practice.” As for composting, Alice notes that vine pruning wood is chopped up annually and collected in row middles as part of the “grape industry’s own unique way of recycling organic matter back into the soil.”

In the Finger Lakes, steep slopes leading down to the region’s many lakes create an ideal microclimate for grape growing. This sloped topography also leads to an increased risk of eroding topsoil. Paul Brock, Winemaker and Owner of Silver Thread Vineyard along Seneca Lake, says “I found myself intensively going down the path of regenerative agriculture back in 2016, three years before I ever even heard the term.” Brock farms on a parcel that has been a vineyard for 170 years. He described digging in an adjacent hedgerow that had never been cultivated, where he found “dark rich soil that was vibrant with life.” While digging in the vineyard he found “light brown soil that was very different than what was in the hedgerow.” He describes this as the essence of regenerative agriculture. Paul’s ultimate goal is to work the soil in the vineyard “back to something like, or closer to, what was in the un-cultivated hedgerow.” In order to achieve this, Paul focuses on keeping the soil covered in organic matter and stabilized by root systems for as much of the year as possible. For the past four years, he has kept a “perennial under vine cover crop of fescue,” but acknowledges that fescue may not be the best fit for his “shallow vineyard soils.” Paul points to the 2018 vintage when a flood caused “extreme erosion in some vineyards” leaving “little under vine organic matter.” This was a test for Paul’s fescue cover crop, which ultimately preserved his vineyard. He recalls that “there was no erosion under our vines” and “the roots of the cover crop kept the soil in place.” Even so, he anticipates “changing things up a bit for 2021 with the goal of going to an annual cover crop within the next two seasons with intensive mulching and compost additions.”

In the coastal wine region of Long Island, the Long Island Sustainable Winegrowing (LISW) program incorporates many regenerative practices into its VineBalance certification scheme. “To me, the philosophy of regenerative winegrowing is already found and embraced in sustainable winegrowing programs, as well as in the NOP” says Rich Olsen-Harbich, Winemaker of Bedell Cellars and President of LISW. Rich points to “improving soil heath through organic matter, cover crops and the reduction of synthetic inputs” as pillars of sustainable farming. He also notes that sustainable winegrowers employ best practices to “protect against erosion, help with water and nutrient retention, store carbon in soil and plant material, and contribute to the organisms under our feet.” Specific LISW practices include the onsite composting of grape pomace leftover from the winemaking process and the establishment of permanent cover crops or grasses between vine rows. Rich also notes that vineyards certified under the LISW program are required to maintain “an eco-compensation zone for biodiversity” in an effort towards conservation.

Despite the undisputed benefits of regenerative vineyard practices for soil health and climate change resilience, application is not always practical for winegrowers in New York State. “The barriers to using specific practices could be financial or philosophical” says Alice Wise. “For larger vineyards, cultivation is simply not an option as it is an expensive, time consuming practice.” She further clarifies that there are not really barriers to regenerative winegrowing “as much as the need to weigh the advantages and disadvantages.” For example, cultivation is sometimes a preferred practice to eliminate the need for herbicides, but it may also increase soil erosion, reduce soil organic carbon, and reduce microbial biodiversity. Another regenerative alternative to weed management is mowing. Alice has been mowing the area under her vines for the last decade or more, but “like every other practice, it has advantages and disadvantages.” She adds that “it is very labor intensive, trunk damage is common, under vine mowers are expensive.” Paul notes that “regenerative agriculture requires a full review of on-farm practices while constantly questioning how this practice is helping to revitalize the soil and reducing our impact on this land, our lakes and our planet.” He suggests that “a better understanding of soil health and how herbicides, tillage and cover crops impact the health of soil is needed” because “by better understanding the true impact of our practices on the health of our soil, and therefore vine health, growers will be able to make better decisions.” 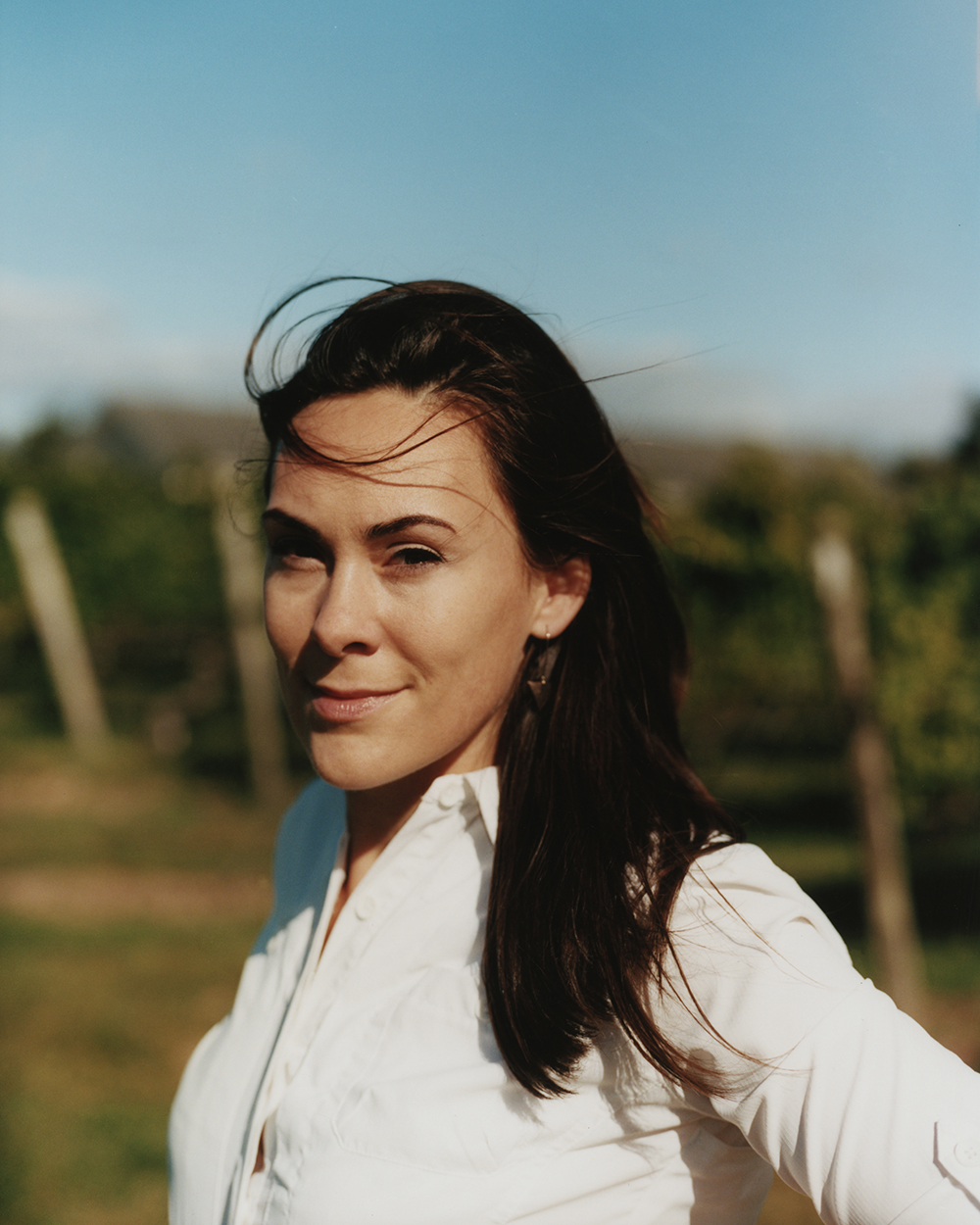 Whitney is a sustainability specialist with a focus on cool climate sustainable winegrowing in New York State. Her decade of experience working in the Long Island wine industry is bolstered by degrees in Viticulture & Enology from Cornell University and Sustainability Management from Columbia University. She serves as the Program Manager of Long Island Sustainable Winegrowing where she manages grower relations, outreach and education, including the Sustainable Wine Professional course and the U.S. Sustainable Winegrowing Summit.
PrevPreviousThe New York Wine & Grape Foundation Announces “Best of Class” from the 2021 New York Wine Classic
NextTop Awards Announced from the 2021 New York Wine ClassicNext